Would you like to import Sake into India from Japan?

Do you think Sake would become popular in India? Who would purchase and drink Sake? Japanese people living abroad or locals from India. Where would Sake be consumed?

Yes, it will definitely be popular in India within a short timespan because of its fine quality and affordable price. Indians will love to buy it. I think instead of Japanese, Indian will purchase Sake in larger numbers. Regarding venues – I believe Sake will be shared both in the common areas of the home, during dinner parties and meet-ups with friends, as well as during formal occasions or in restaurants.

Usually, imported Japanese items are expensive. Despite the expense compared to local beverages, who do you think will buy sake in India?

While you are right, Indians love trying out new things and they’re also very fond of having imported luxuries like beverages. I’m certain Sake would have a very profitable business niche in India.

What do you think would be the KEY SUCCESS POINT of importing sake into India?

Geographical and audience targeting. For instance, you should target states like Maharashtra, Karnataka and Himachal Pradesh that have taken steps to encourage wine industry and give preferential treatment to importers by liberalizing their excise regime and reducing excise duties.

80 % of the consumption of wine in India is confined to major cities such as Mumbai (39%), Delhi (23%), Bangalore (9%) and the Goa (9%). So, by having an over view you can plan a proper strategy and proceed accordingly. Also, you’ll want to include a successful brand and naming strategy. People want attractive brands, good packaging and excellent launches with offers.

Is there any trend of Japanese restaurant or food in India?

We all know that Japanese food or drinks are amongst the healthiest and most delicious in the world. Indian people love to go for food that tastes well, and I think it’s a combination of this coupled with the unique presentation that results in the fame of Japanese cuisine in India. Even I too love to have Japanese food as after having it I always think;” How could be raw food taste so amazing? “

Do you know how much volume of sake was imported into India during the most recent period of time?

The Ministry of Finance “Import Customs Statistics” the volume and value are stated as below. 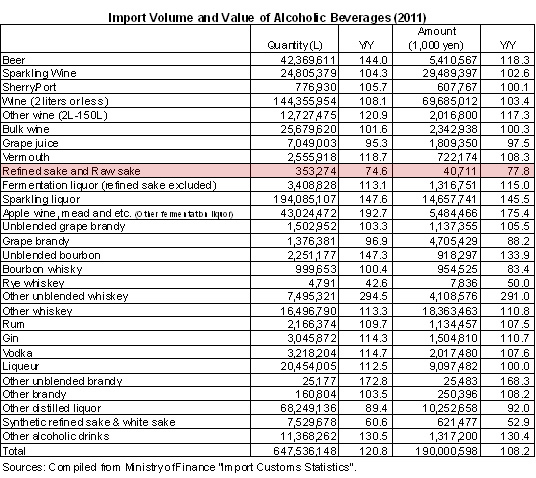 I would guess the consumption of sake keeps growing in India because it has only recently starting to become popular here. It’s still a niche product, but a lot of people are waiting for more quality sake above all to be imported.

What would be the primary target audience for Sake in India? 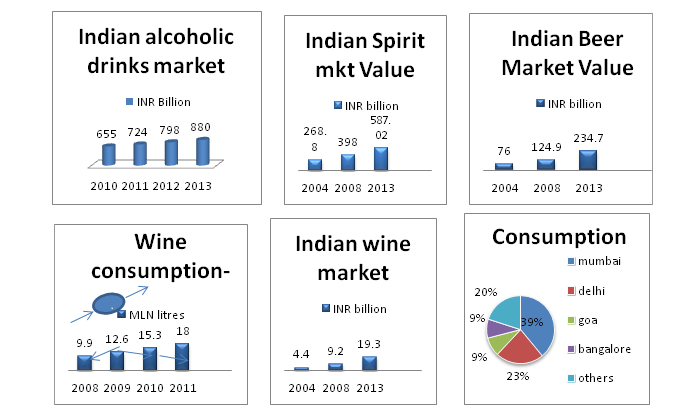 So, Sake can have a very good and profitable business here. I think Sake will be quite popular among young adults especially as by having the Sake, they can get the taste of purest water like from a mountain spring. The main benefit is that this Sake is healthy – it is made in Sake “breweries” and it’s not really beer, it’s much more than that. It’s twice effective and tasty. So, I am sure that people are going to love it.

How would we go about successfully exposing and marketing Sake to the population?

For this you must follow a proper marketing strategy to conquer the Sake market in India. I am sending an Image that will display the major stats regarding the consumption of products similar to Japanese Sake. You can promote your product via common advertisements.

You can also contact Japanese restaurants or other Indians or continental restaurants in India to launch your product. Initially, you can a start by offering discounts if they are open to carrying your Sake, as well as complementary drinks with a dish.

The best way for marketing this would be ‘Word of Mouth’, by achieving massive breakthrough using strategies such as these – let Indians have a sip of Sake and let them indulge in it’s delicious and outstanding effects.