After visiting the Kyoto region, I travelled to the Shimane prefecture to see Yoshida Shuzo, known as Gassan. As some of you probably remember, I’ve actually been to Gassan before, but this time Yoshida-san let me experience the entirety of the Sake brewing process, in addition to letting me stay at his home – a very generous offer I was quick to accept.

This is a picture from the front of Yoshida Shuzo, where you can see the iconic Moon depicted on the front wall. ‘Gassan’ actually stands for Mountain and Moon, so their logo is suitably accurate. 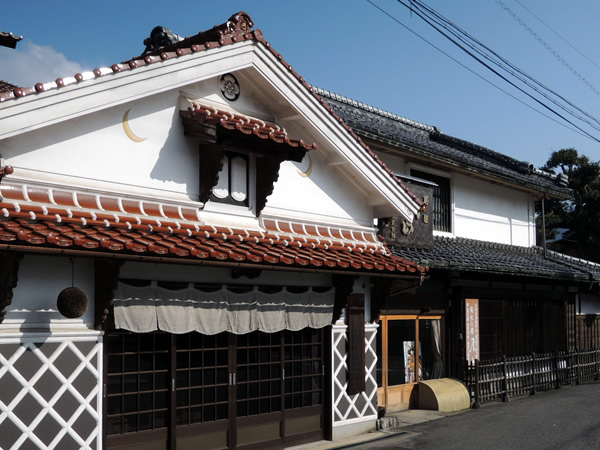 Yoshida-san’s sake has been one of my most popular exports to the American market. Because of this, Yoshida-san and I have been spending quite a bit of time together over the past couple of years. About a year ago, I invited the American importer with whom I work to visit Yoshida-san’s Kura. This was during February, which meant that it was actually quite cold during our visit. During this trip to Gassan however, it was March which meant that things had warmed up very nicely and the climate was pleasantly temperate. As you may know, the Sake brewing season is generally from the fall to the end of spring, which basically meant that the brewers and producers were close to finishing this year’s brewing season. However, I still had the chance to see many interesting things as they were done.

This is actually me getting rid of sakekasu (sake lees) out of YABUTA filtration system. They quickly put me to work and I was eager to help out! 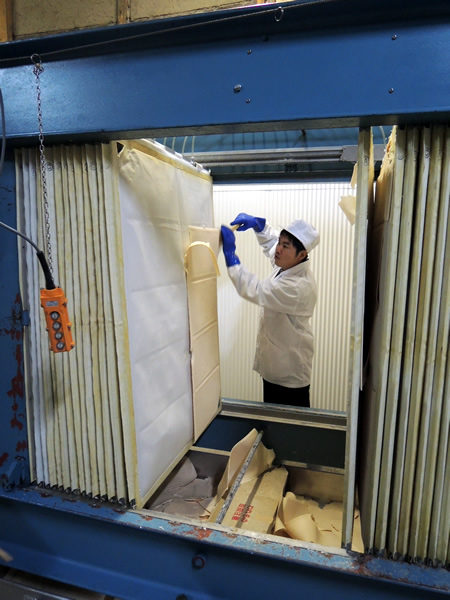 Another kurabito and I spent about an hour to taking care of this filter, to prepare it for another round of filtering in the morning. The Sake lees that have been separated from the original milky sake, stick to the panels which means that you need to use a large spatula in order to remove the lees. Imagine doing that kind of work with 50-60 panels – brewing Sake and the maintenance of the machinery is heavy work!

The YABUTA filteration machine looks like a large accordion where the Sake will be filtered through the various mesh panels. The capability of filtering roughly 2000 liters of Sake, and it runs for about day to filter 2000 liter of sake! About 2700 bottles (720ml) worth! 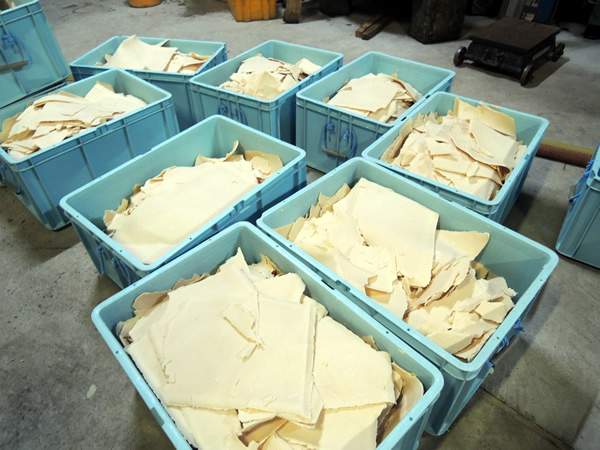 This is how much SAKEKASU (Sake lees)  we got!

On the picture below, you see the stainless tank – much like a large bath tub. The water contained within is heated to about 70 degrees Celsius (158F). What they are doing is actually heating up the already-bottled sake in order to pasteurize it. 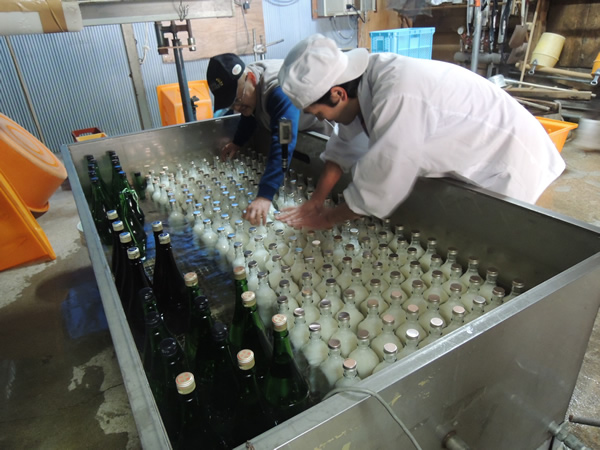 In this sort of tank and during this stage in the process, the fermentation is still active and the yeast cultures within still very much alive.

In order to ensure that all heat-sensitive enzymes that remain from the Koji are neutralized, this sort of pasteurization is absolutely crucial. It also ensures that certain microorganisms are killed off and that the flavor of the Sake is the best that it can be. Imagine unpasteurized Sake as a spirit with a much more lively and aromatic character to it. Like with any number of alcoholic liquors and spirits however, pasteurization is necessary.

Breweries use different techniques to achieve this. Some breweries pump the Sake through a pipe submerged in heated water to achieve the desired effect – other breweries submerge bottled Sake in hot water, much like on the picture above.

In the end, it depends on the required capacity of brewing. If we have hundreds or thousands of bottles that need pasteurization at one time, a brewer might elect an automated method. In this case however, we only have a hundred bottles at one time, which means that the heated water tub-method is equally effective. It is still intense labor however, as you need to keep shaking the bottles and constantly work with your face close to heated, steaming water. As an exporter, it’s crucial to know the different parts of the process however, so I tried my best to support the other workers in their daily tasks and routines.

This is a picture depicting the process of steaming rice. 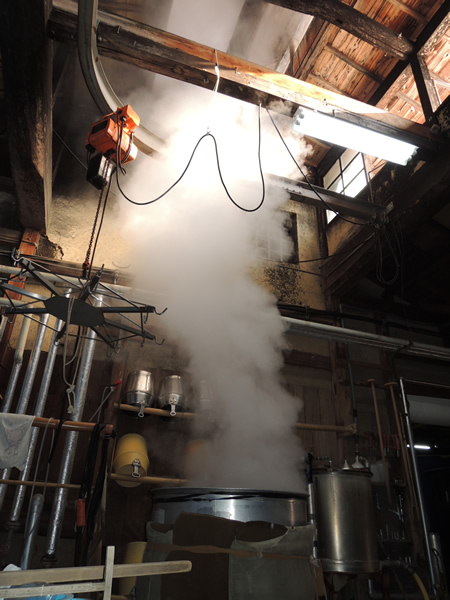 You see a lot of hot steam keeps coming up, and it goes up by the ceiling of the Kura. Usually, the building has some space on the ceiling in order to get the steam out of the Kura, so this rising steam actually goes outside where you see it rising to the ceiling. This sort of smoking, steaming look is very typical of an active sakagura (sake brewery). 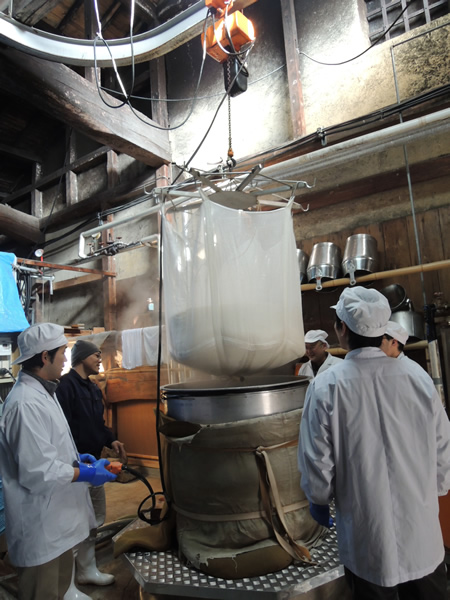 This is the picture of kurabitos lifting up steamed rice from the steamer. As you can imagine, a batch of steamed rice is quite heavy! It’s better to use a lift to take care of this part of the process in order to conserve your body and your strength. Many of machines that you see at sake breweries nowadays are designed to support the workers in the more demanding tasks. If the process was even more arduous or taxing than it already is, they would have trouble finding the capable workers to do the various tasks – employing machines is therefore completely understandable. 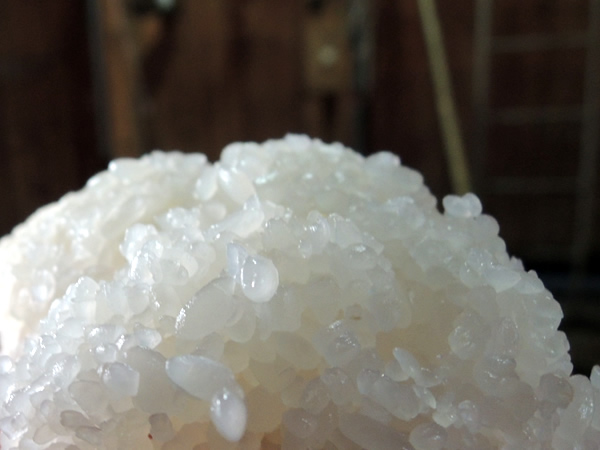 After about an hour of constant steaming, the rice looks like this. You might think it looks sticky, but the fact is that rice steamed in this fashion and intended for Sake brewing is not sticky in the least. – It is instead soft on the outside with a hard inner core.

After the steaming process, the kurabitos are adding still-hot rice to small tank. 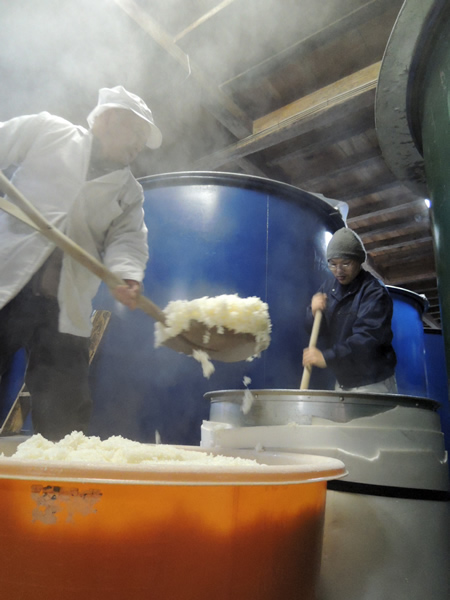 What they are doing is check the tank temperature before blending the steamed rice with cold air. Normally, you don’t see any air conditioning in the Sakagura (Sake-brewing facility), so the temperature inside is very cold.

This picture depicts the freshly-filtered Sake running out. 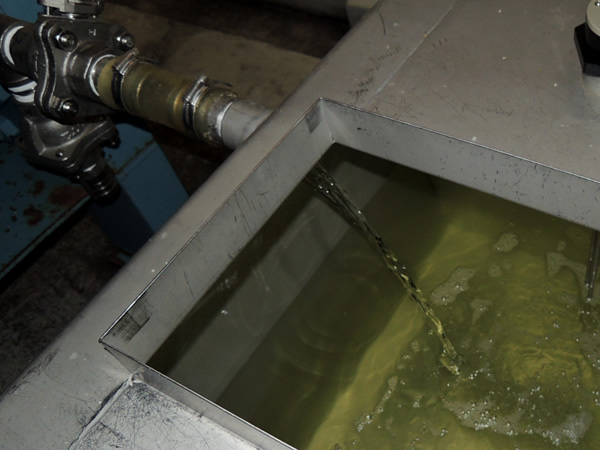 Usually, the freshly-brewed sake contains about 18-20 % alcohol. At this stage, the Sake is, as such, a little stronger than the standard sake you’d usually end up buying at your local store. In the following stages, the brewers add a small amount of additional spring water to balance the alcohol content. 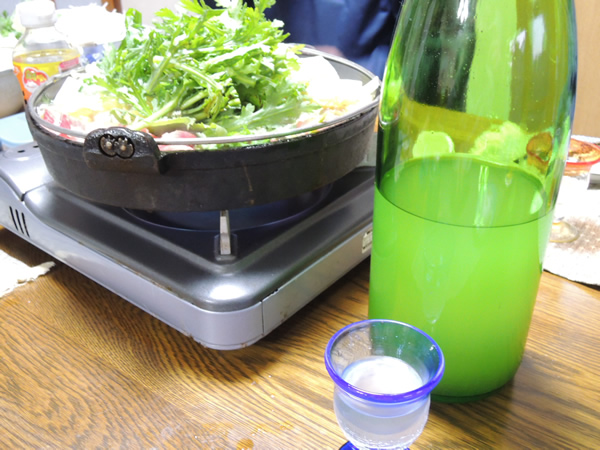 Later that night, the Yoshida family welcomed me with Sukiyaki, a well-known Japanese hotpot food. We ended up pairing the Sukiyaki with freshly brewed sake – a slightly cloudy and fizzy variety only available at the Kura! It was a delicious meal and I’m grateful for their kind welcome. 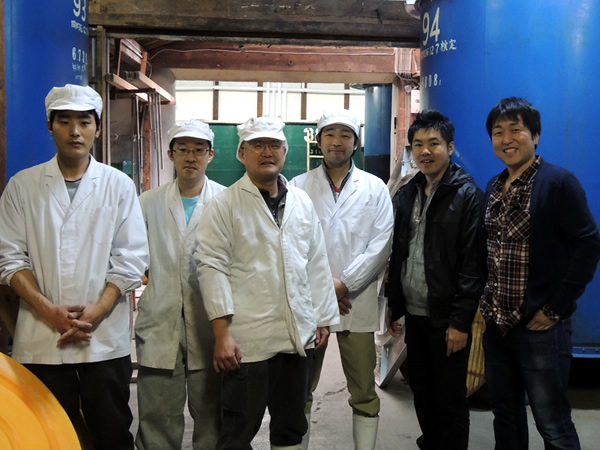 The time spent at Yoshida-san’s Kura was very informative and pleasant. In experiencing the brewing process, it’s very important to know the various details and intricacies about it. Understanding Sake by reading textbooks alone is simply not possible, and I think what distinguishes quality exporters from the rest is intimate knowledge both of the brands and the breweries and processes of the Sake that they represent.