Recently, I had the opportunity to visit Doi Shuzojo, known as KAIUN due to their sake brand name, in Shizuoka. To the visit and tour I brought with me a Vietnamese importer with whom I’ve had business as of late.

Kaiun stands for “good luck” or “fortune” in Japanese, which makes their brand name very easy for everyone to memorize – and recognize. Their spirit has the distinction of often being served at wedding ceremonies.

We were in luck, and due to our timing and the brewmaster’s generosity, we were able to ask Doi-san to see the brewing process and actually experience its entirety from early in the morning. At 4:45 AM, Doi-san came to our hotel in Kakegawa city, Shizuoka to pick us up.

Below is the entrance gate of Kaiun where you can see some of the kurabito (brewery workers) running around and preparing to begin the morning’s work. This is very early in the day as their sake brewing process begin at 5AM. 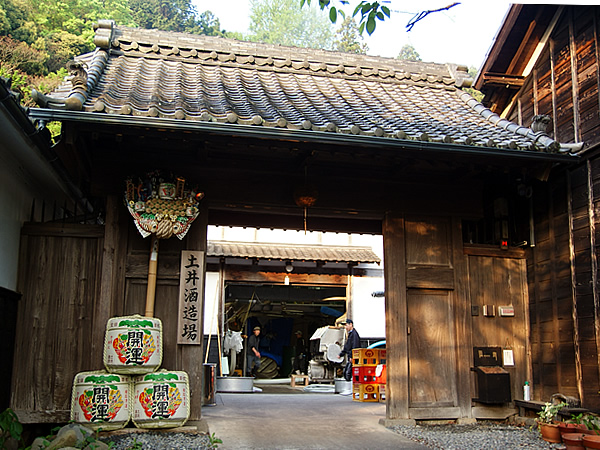 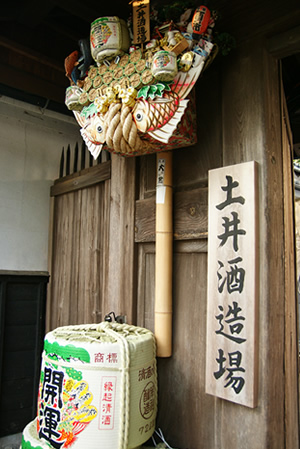 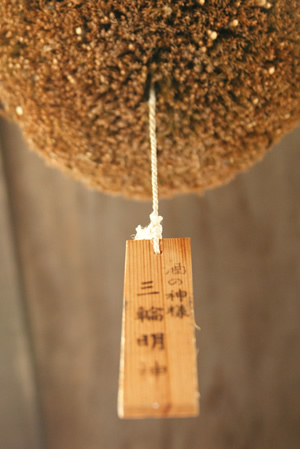 As soon as we arrived at the kura, our sake brewery experience began.

First, we entered into the Koji-making room where kurabitos (brewery workers) sprinkled Koji-mold spores on the steamed rice. The Koji works to break down the starch molecules into sugar molecules which can then be processed by the yeast cells. The producers use the Koji to begin the sake fermentation process.

Making Koji (mold-inoculated rice) usually takes 40-50 hours in the koji-making room were both temperature and humidity are very high. 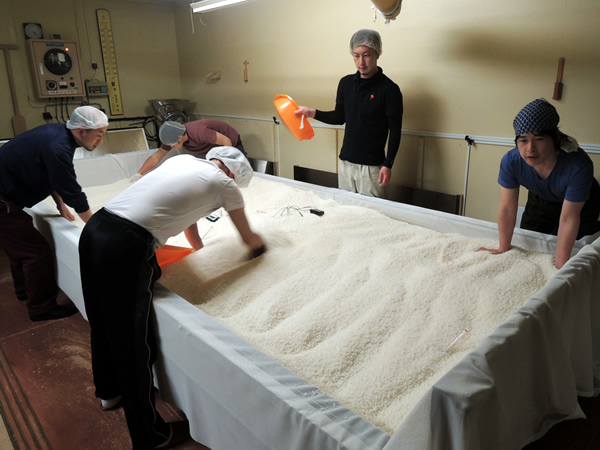 We witnessed the workers cooling down the temperature of Koji prepared the before. By using their hands and pushing air into the Koji rice, the temperature is actually lowered.

In a traditional wine-making process, the sugar from the grapes is the key ingredient of the fermentation process. In sake however, the main ingredients is simply rice. As you know, rice does not contain sugar – it instead contains starch. So sake producers use the Koji-mold to turn starch into sugar in the process. These enzymes activate within very specific temperature ranges, and making sure it happens correctly is very arduous work. The temperature within the room can be likened to that of a warm summer day, while on the outside it is the dead of winter. For sake breweries, this process is absolutely crucial for the brewing of sake, and it is of rare for visitors to experience this part of the process at all. Koji-making is called the heart of the Sake-brewing for a reason, and I was very pleased and grateful to be allowed inside to witness it – much less document it. 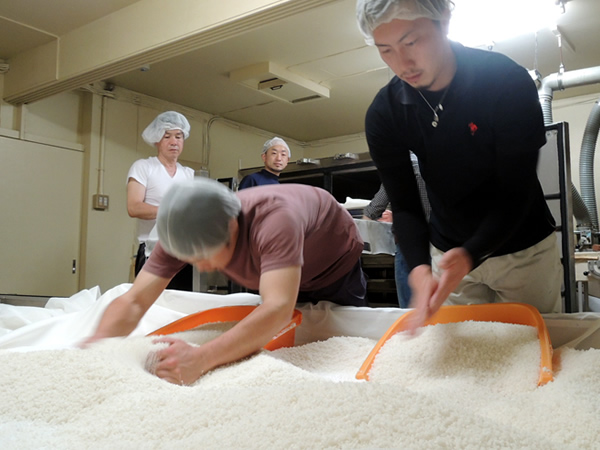 After cooling down the Koji to a proper temperature, the kurabitos load it on trays to keep the temperature steady.

Next we saw the steaming of massive amount of rice. The rice was actually steamed for about a full hour before the next step in the brewing process. 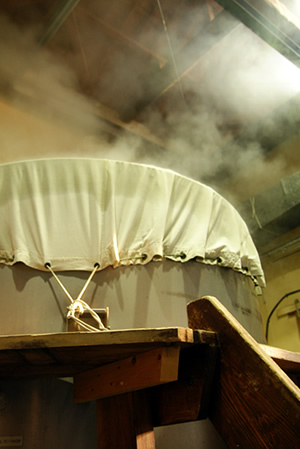 You see steam is coming up 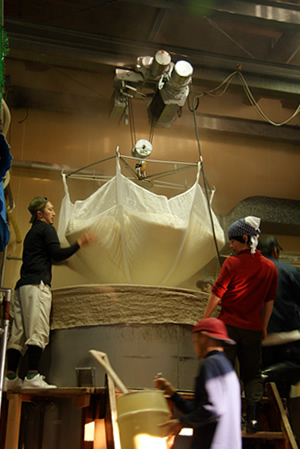 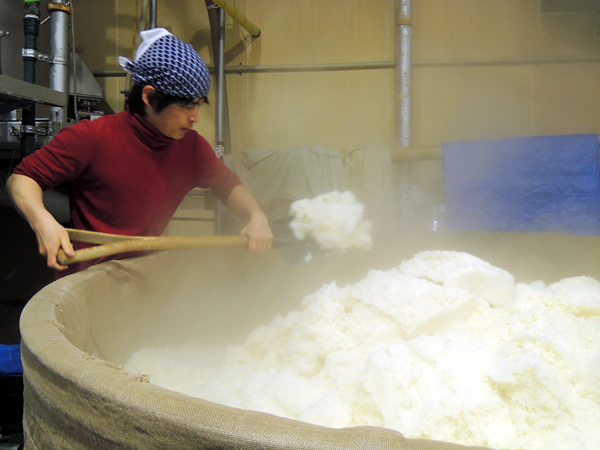 This is Doi-san, shoveling the steamed rice, and gathering it into the center in order to elevate it to a proper level.

After this, we returned to the Koji-making room to prepare another batch of Koji. The rice in the picture was steamed just this morning, so it needed cooling down – done by closely monitoring the thermometer, as shown on the picture. 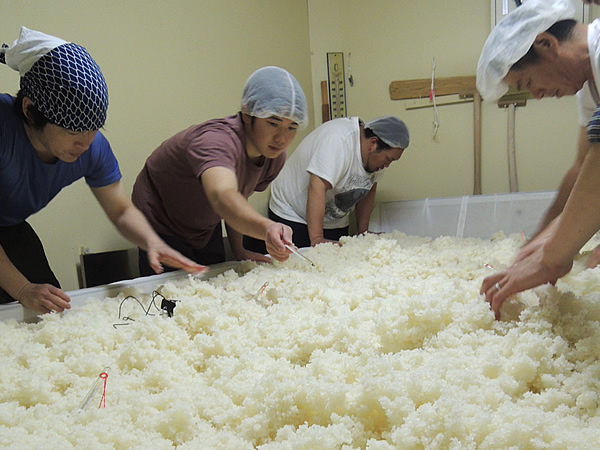 Your first instinct may be to think of this rice as sticky, but in actuality rice intended for sake brewing, that’s been steamed, is not sticky at all. Instead, its outside is soft and inside is hard.

We then watched as they washed the rice for tomorrow’s steaming process. Usually, the sake brewers prepare (wash and soak) their rice the day before the steaming process. By taking an entire day, the rice absorbs water very slowly – that’s the sort of timing the brewers are looking for. 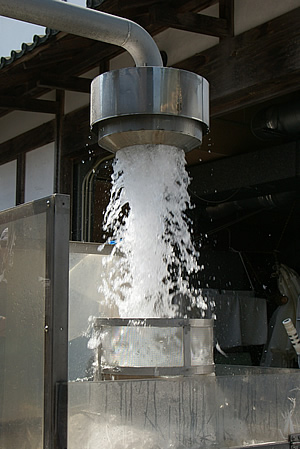 Massive amount of water is coming down to the polished rice 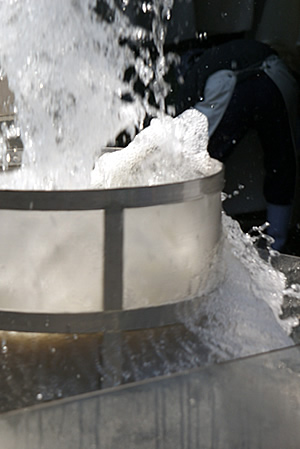 This particular washing process was very interesting to me personally because i’ve never actually seen a machine like this – most of the washing i’ve seen in previous Kura visits have been done using different processes. 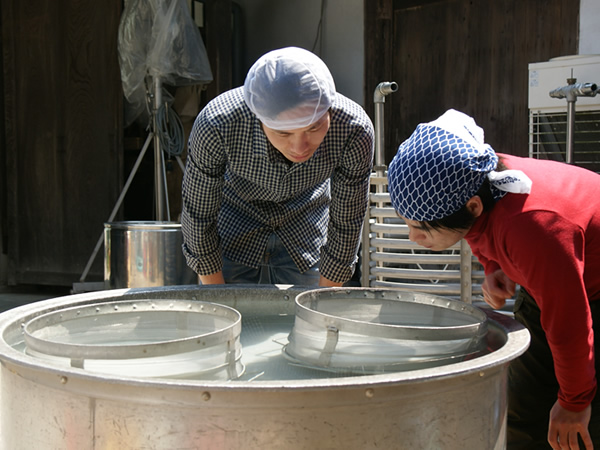 After the washing process, the producers allow for the rice to absorb water. They usually check the time closely by the second, as this is a very critical stage.

This is the rice for tomorrow’s steaming process after it’s been washed – allowed to sit overnight. 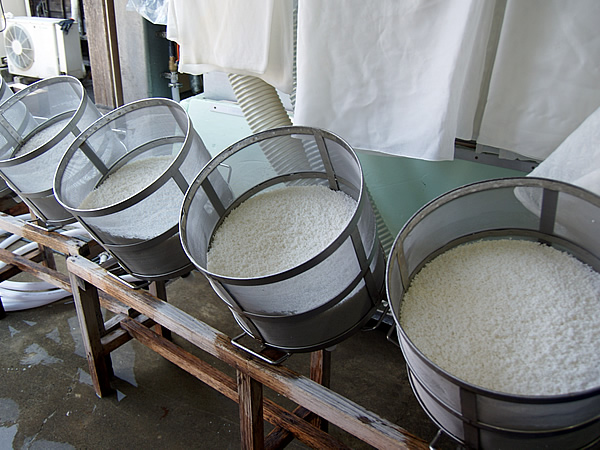 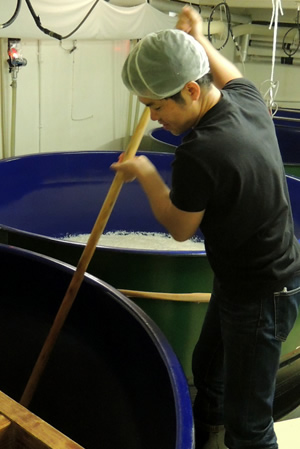 I got a chance to blend the sake tank – it was heavy (difficult) work to blend the tank due to the amount of mashed rice inside. 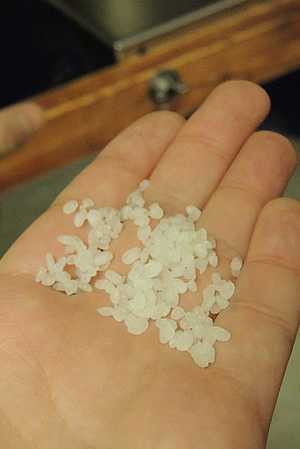 The steamed rice were cooled down

and then put into the fermentation tank.

The machine on the left of following picture is called “YABUTA”, and it looks like a collection of large accordions. The sake before going through this particular filter looks like white liquid or milk. It is then pumped between the many mesh panels in the YABUTA, where ballon-like membranes inside that “accordion” send the liquid through the mesh. It basically separates sake lees (mashed rice) and liquid sake. Usually, it runs for about day to filter about 2000 liter of sake! 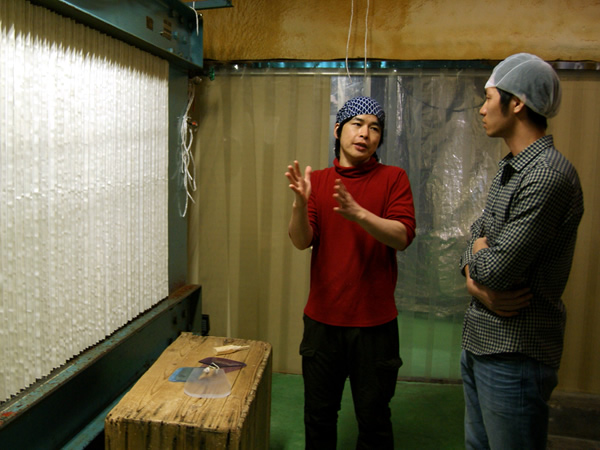 We – naturally – got a chance to taste freshly filtered sake, which had a certain fizzy/carbonated character due to its incredible freshness. Eventually this fade as the brewing process takes its course, but it’s a good experience to taste the Nama-Sake (unpasteurized Sake) straight out of the filter. 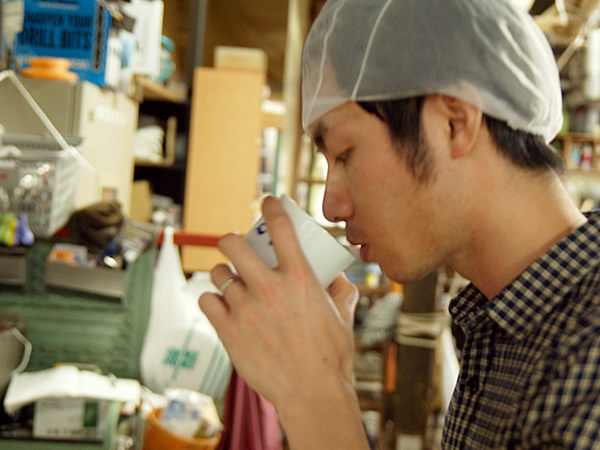 One of the kurabitos was checking the sake that was still in the tank to make sure the fermentation process is going well and within parameters. Usually they check it daily make sure of the sake’s condition and continued well-being. 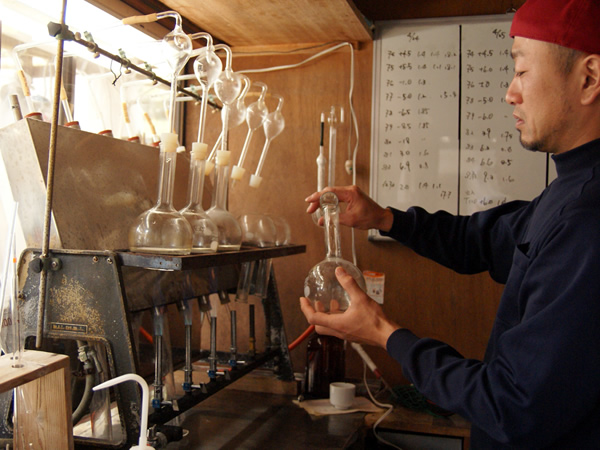 Following the entirety of the brewing process, Kaiun’s sake is now properly bottled and labeled. It was well- worth to visit the kura in order to see the sake brewing process. The more I know about the sake, the more interested I become in the process that goes on behind the scenes. 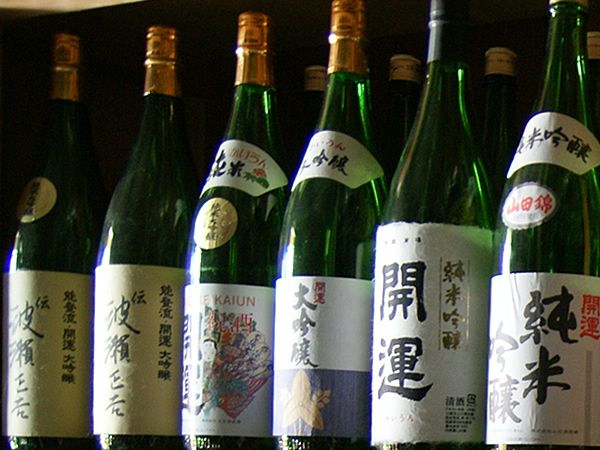 Seeing Doi-san at his kura was very pleasant and we had an amazing time in Kakegawa, Shizuoka. 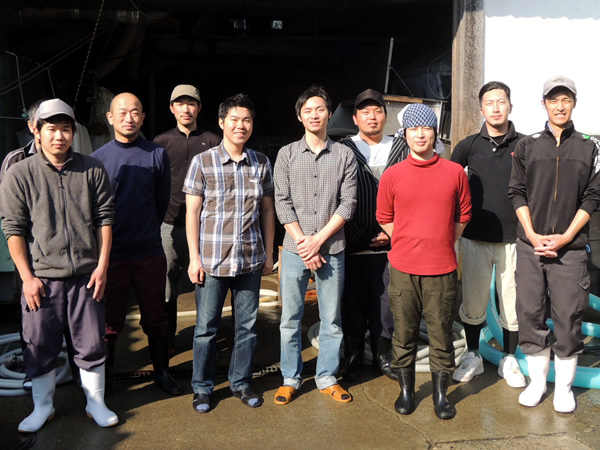 I also want to thank all the kurabitos for welcoming us to the brewery and let us experience their sake-brewing process. My interest and passion for Kaiun is higher than ever and hopefully I will export more Kaiun Sake to foreign countries in the near future.

Yours truly & until next time